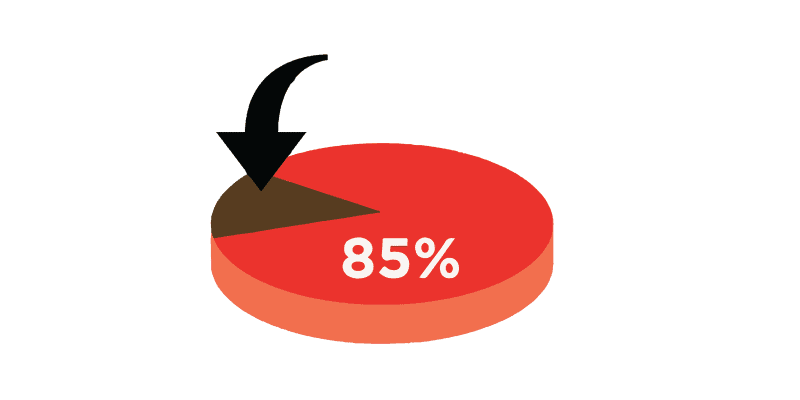 I spent the weekend working with one of my Hotel venue partners, they are performing really, really well. Their accommodation is running at nearly a hundred percent, they have a full house every night with 600 guests in the restaurant, whilst operating with a team that’s limited in numbers due to the pressure of trying to recruit new people.

Currently, one of the biggest challenges in the hospitality industry is that they used to have a lot of overseas employees and candidates however, due to COVID the access to these people has been lost.

One thing that really showed up whilst I was working with the team that would have made a BIG difference, was the lack of set up, which fits inside of the 85/15 principle.

It’s you’re planning and preparation that is even more important than your actual service.

The first 15% has to be about the setup – what is required to fulfil on the outcome.

Someone decided to reduce the kitchen hands hours and have them start their shift one hour after service had begun.

Clearly this would save one hour of wages, however the impact of that decision was that there was no one to clear dishes away, as they started to come back to the kitchen.

The frontline team were wasting time, either trying to find a place to stack the dishes and cutlery or putting them into the washing racks.

And as we were already short staffed out in the front of house, the impact of that was customers were waiting because there was no available team to run their meals to them.

The whole impact of NOT having that one person (a relatively low-paid position) rostered at the start of service, was that in the end the situation got so bad, that we couldn’t actually clear tables, set new tables and seat the next sitting of customers after the first sitting had dined.

Why? Because we had nowhere to put the dishes…

The whole point of this article is that the decision made was not thought about enough to what the consequence might be. They didn’t get the ‘cause and effect’.

It should never have happened if we had our system right in the first place.

It seems like a simple thing right but this one decision, caused a lot of stress on the team and had a massive impact on the overall customer experience.

This role is a relatively low paid position. Yet, the role it plays within the system has a massive impact on the efficiency of that system.

My point is, if the setup had been done and those critical systems had been put into place, then we wouldn’t have had this impact in the moment.

They were all system problems.

So, another point to this article is,

In this example, the breakdown in the system had a massive impact on the people and then again impacted our ability to provide great customer service, which is our aim of delivering 10 out of 10.

What’s your example of this?

I remember when I was working with service stations, when I first started developing training programs and they used to have two staff on all the time, but then as the cost of fuel and the margins were decreasing, they only had a two-hour time crossover period and that’s where all the admin stuff had to be done.

Setup had to be done prior to a one person shift.

Supermarkets do major stocking in the evenings or when the store is closed so they have full shelves and are not in the way of customers while they shop.

It’s all about efficiency.

I use to be the National Training Manager with NZ Lotteries, and one of our challenges is that 50% of the ticket sales occurred on the Saturday.

Knowing this meant we needed to plan for this with each store. One of the challenges  for most stores was that they would need to change the ticket role though the day, plus the ribbons of the machines would get warn.

What did we do?

Firstly, every store had to start the day with a new ribbon and in the training course we taught the staff how to change the paper role, in fact to pass the course they had to be able to change the role in 45 seconds; we made this a game.

This was all designed to ensure they maximized the sales for that day without any system problems.

I also worked with a manufacturing company who ran three shifts per day and the biggest impact and what created the biggest issues between teams was who was cleaning up and restocking the raw material between shifts. This was not defined enough and there was no crossover time to have these things handled.

What did we do?

We put in a 30 min crossover time to allow a handover and clean up.

I invite you to list all the things that need to be done to ensure your staff are able to focus on the customers experience when they are serving or having to perform their roles whether they be in a factory, retail, restaurant, sales or even sports team.

If I can support you in improving your systems so that your team can focus on the things that actually make the difference, then contact me to discuss. Checking in with your team is a great way for leaders to gain a clear understanding about their team. It provides the time to discuss any questions, concerns or ideas and problem solve on the spot. In last week’s update, we explored ways to set your team up for success through asking key questions before…

Natural motivation is the outcome of doing something you really like to do. You can stay motivated for long periods of time, and time passes by very quickly. Each of us has our own passions and interests, we don’t need encouragement to get motivated as we are energised naturally. For me, I don’t need to…