I was reminded recently of an experience I had many years ago, which may also ring true for you.
Here’s how it goes.

I was working in a large organisation in New Zealand, as the training manager of the company, we were doing some fantastic work and unexpectedly, I got a message from the secretary of the CEO, letting me know the CEO would like to see me at nine o’clock in his office the next morning.

I had no idea what for. I had absolutely no idea why he would want to see me. I had a boss who reported to another boss, who reported directly to the CEO, I was like three levels down the chain – so why me?

I sweated for the rest of the day! Racking my brains about what I could have possibly done wrong that the CEO wants to talk to me about. What could he possibly know? What does he know that I don’t? It’s not like I talk with him often.

After a restless night’s sleep I found myself ready and waiting outside his office at nine o’clock in anticipation of meeting with him – still absolutely no idea why?

As he opened the door to his office and greeted me with a smile he proceeded to tell me what a great job I was doing, and how he’d had such wonderful feedback about the training that myself and my team were running across the five day program.

Although it was obviously lovely to get the positive feedback, I kept thinking to myself – why couldn’t you have told me? Why, couldn’t your secretary have said Craig, (the CEO’s name) has some great feedback for you. He would love to see you at nine o’clock in the morning.

Imagine the difference that would have made.

We often have great intentions, but we leave people concerned because we haven’t let them know our true intent.

At The Loyalty Zone we’re great believers in really thinking about how the other person may feel, when communicating with them. It’s important not to leave people confused or wondering what’s coming next. There really should be no surprises.

If you want to give positive feedback, just keep it positive.

It’s also not about falsely setting them up to think a conversation or meeting is going to be great, when it’s about reinforcing behavior or improvement feedback.

When giving reinforcement or improvement feedback we must let people know straight away. For example, I’ve got a small improvement for you.

One of my core training and coaching beliefs about giving feedback is that, positive feedback should always be given last.

If you’ve got reinforcement or improvement feedback, it should always be delivered first and finish on the positives, or just give positive feedback on its own.

When I was first taught to give feedback, I was taught, what we used to call the ‘poo sandwich’, give a positive, give a negative, and then give a positive.

What I learned while I was doing a lot of coaching on the job with people. If I started with the positive, before I had even got to the negative – they often would say, yeah, yeah, but what do you really want to tell me?

And I realised very quickly that, using that model was a huge mistake. All I was doing was hiding my true intent, which was to provide some reinforcement or improvement feedback.

It was during this time in my career, I changed my feedback model to one that does not use negative language, like blaming, like mistake, or what you did wrong.

My feedback model is clear and inclusive.

For example, Jo I have a small improvement to discuss with you. I then tell Jo what the improvement is, and then ask Jo to come up with some solutions by simply saying – Jo, what could you do to improve? and then finish the conversation on the positives being very specific.

Anyone who’s been coached by The Loyalty Zone, will tell you, if they are given positive feedback, straightaway, they know the conversation will remain positive. And they really listen and take it in.

My question is what feedback model do you use? And, if different to mine, how effective is it?

What’s far more effective is to catch people doing it right; specifically, what they did right and providing them with positive feedback.

For example, think about how many team members turn up for work every single day on time, if not early? Do you ever acknowledge them? Provide them with positive feedback?

What would it be like to actually go up to those people and say,

“I noticed you’re always at work 15 minutes early and I just want to let you know how I appreciate the fact that you put in that extra time and to make sure that when it’s nine o’clock and the store opens, you’re ready to start, thank you”.

All of a sudden that team member will feel appreciated and know that their efforts are noticed.

I call this practice good finding, looking for the good. Looking for the positive, more than the negative and to also praise effort.

I encourage you to take some time to think about all the really great work your people do or effort your people put in unprompted that is never praised and praise someone today.

If you would like to have a chat with me about ‘Coaching and my feedback model’ contact me I look forward to hearing from you. 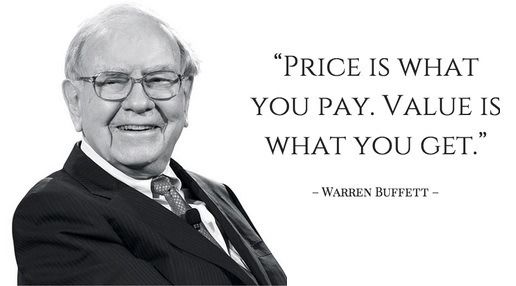 As Warren Buffet says, “Price is what you pay; value is what you get”. Reading this article will tell you how you can improve your value position Instead of customers only being concerned with price. You do this ensuring they experience value with the experience they have when they purchase the product or service you… The concept of “10 out of 10 or nothing” is about doing something perfectly. It’s not just an empty saying. It’s a focus, a belief, a way of living, and a way of operating your business. One of the first steps to deliver a 10 out of 10 service is to research your customers and…